Are you sitting comfortably then I’ll begin………..
Once upon a time last summer Grandma went to a boot fair and saw …….
A pram and a buggy 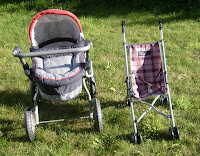 Grandma instantly thought they would make a lovely present for Caitlin. Caitlin was only just a year then and grandma thought her a bit small for them both, so grandma decided to give the buggy to Caitlin for Christmas with a dolly and a carrycot. 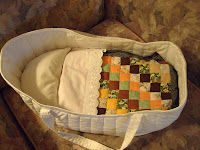 Grandma didn’t actually see Caitlin till after Christmas when her little brother Liam was born. Everyone had two Christmases and Caitlin got her presents late. Caitlin had grown so she was able to push the buggy around - empty! Whenever Dolly or a teddy were put in the buggy they instantly got tossed out! She prefered the buggy was pushed around empty.

Fast forward to Easter when they visited Grandma and Granddad, Grandma set up the pram for Caitlin to play with, really to see if she would fit the pram and that she wasn’t too short for it. This time Grandma found a teddy and put this in the pram so Caitlin could see what you are supposed to do. Teddy was pushed up and down the garden a couple of times, unceremoniously pulled out of the pram and dumped on the ground then put back much to the joy of everyone watching, but we all said we hope she doesn’t do that to Liam!

Grandma was happy that this year the pram would be suitable for Caitlin so she thought she would make another dolly for Caitlin. Grandma remembered she had a pattern for a very large rag doll, a life size rag doll in fact, but just couldn’t remember where on earth it was without upturning the whole house. Instead she scoured the internet and found a download for the same dolly as Grandma knew she had somewhere. This Dolly, being life size, would be the same size as Caitlin is now, so rather than printing it out on A4 paper she printed it out on to A5 and made dolly half the size and this size is more suitable for dolly's pram.


Dolly has been made a while now, but now needs some clothes. Grandma was going to the big town to meet a lady called Dee so while she was there she thought she would look in the shop that sold fabric. Grandma knew the price of cotton had shot up but didn’t think it was that expensive! Grandma was sad because she saw some really pretty fabric that had roses all over it but it was £12 per metre; even if she bought enough to make Caitlin a dress as well, she still couldn’t justify the cost. Then Grandma had an idea! She would look in the charity shops for skirts and dresses. She found one on the way home that day which was a skirt with the label ‘Liberty’s’

Then Grandma went to visit Caitlin’s Great Granddad and whilst there scoured the charity shops and found more skirts, she also went into a shop and bought Caitlin some pretty dresses for her birthday. Although it wasn't Caitlin’s birthday till August, Grandma thought it would be a good idea to give her the dresses when  visiting Caitlin on the way home from Great Granddads. The dresses were huge, so grandma offered to exchange them, but Caitlin’s mummy said not to worry Then Grandma had a secret idea in her mind! You see while she was visiting one of the charity shops in Tavistock she came across a vintage dress pattern so when she came home, Grandma washed all the skirts and hung them out to dry. Grandma took all the skirts to pieces after they had dried,. pressed all the material and made this pretty dress for Caitlin. 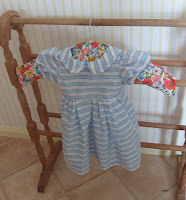 Then she remembered poor Dolly needed a frock!

So...........Grandma made this dress with matching knickers! 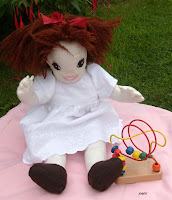 And this white frock, also with matching knickers!

She also dressed the pram too ready for Caitlin’s second birthday.


Both dolly's frocks and knickers and Caitlin's vintage style dress  and the quilt on the dolly's pram plus the pram bedding were all upcyclced, dolly herself was made from new material. 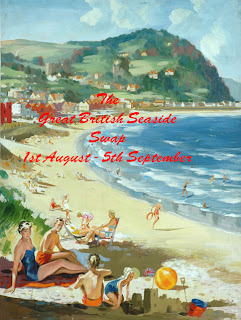 If you would like to join in add your names below.
There are not many rules:~ 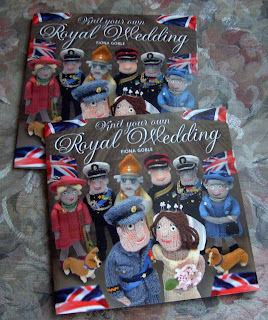 I have two copies of this book.  My friend Jane gave me a copy for my birthday back in April.
So if you would like a copy please leave you name below. Draw will take place on 1st August.*

* please let me know which you would like to be entered in otherwise I will put your name into both 'hats'!
Posted by KC'sCourt! at 08:04 2 comments: 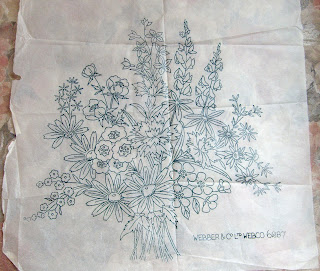 I have revamped and re-named my shop - please take a look! 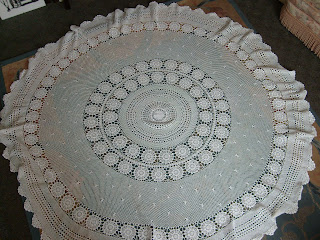 Evening Stroll Round the Garden! 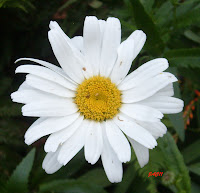 ﻿﻿
Daisy that came from a stock that once belonged to my grandmother.  She planted the original Daisies when she was a little girl in the 20's and took a clump of them when she married and moved into her own home, she moved twice after marrying and took a clump with her, after she died mum and dad were building their new home in Dartmouth so they took a clump with them, and when they moved from there mum gave me a clump and in turn I will give a clump each to the boys as they set up home.
﻿﻿﻿﻿﻿﻿

On Saturday we went to Exeter, I wanted to go to here.
We had lunch in the Cathedral cafe, very nice it was too.
More images cathedral here
When we returned home there was a parcel waiting for me from Sue
I hung the pretty bunting up at my kitchen window, got the idea from Hen
Picked the only Sweet pea that flowered
Made some cakes, the recipe can be found here
The Butter Icing is 3ozs Butter - 5ozs Icing Sugar and a few drops of Lemon Juice to taste ( I used a fresh Lemon because that is all I had!) Beat all together and spread onto cakes, add sprinkles if you wish.


We have a Triffid growing in the kitchen!
A friend gave me a lettuce the other day complete with root, last time she gave me a lettuce I tore the root off and just put it in the fridge needless to say the lettuce went limp no better description really manky!  So I decided to put this lettuce in a vase of water, as you can see it is trying to take over the kitchen!  By-the-way the lettuce actually look like that, I think it is a 'Ruby Lettuce'.
My Day Lily in the rain﻿
Posted by KC'sCourt! at 18:13 8 comments:

We actually got to a Boot Fair this morning. We missed the first two of the season due to other activities. 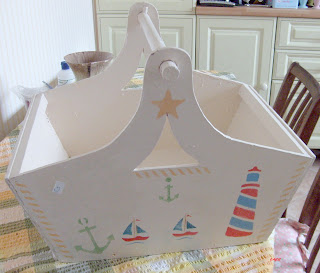 bought this painted wooden trug/basket. It says £3 but got it for £2.50 because the lady new me! 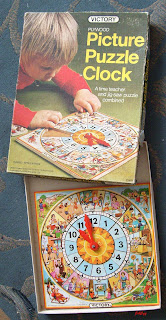 Grabbed this puzzle much to a dealer's annoyance for 50p 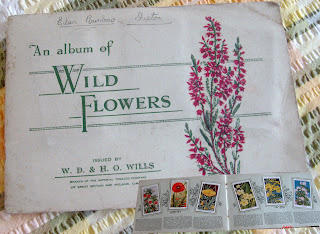 This book of cigarette cards for £3. 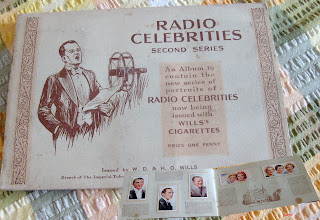 This book of cigarette cards also for £3 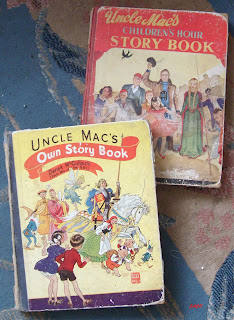 More flowers in the garden 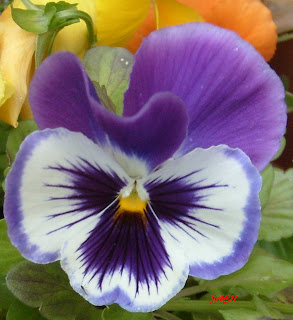 Pansies with their funny little faces

This yellow shrub has a buzz!
In the warm weather it is full of bees 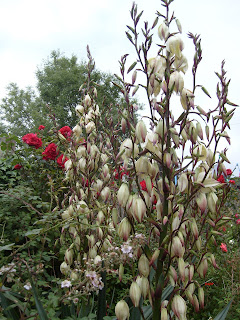 My Yucca reaching for the sky 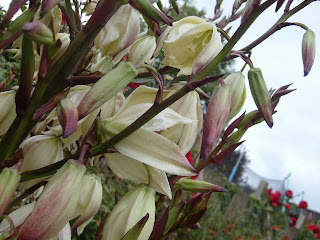 I Just love the way the Yucca flowers look. 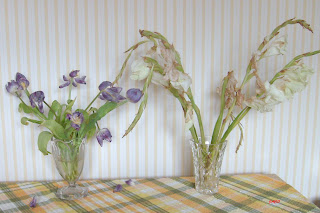 After re-reading the previous post some one pointed out to me that some people may well be on their "Seaside Holiday" too, so the dates have now been changed

The selection will take place on Monday 1st August and the swap will be by Monday 5th September. So if you thought about joining in and would like to change your mind please feel free. Same rules as before, as I'm starting again please leave your comments on this post for both swap and book - Thank you 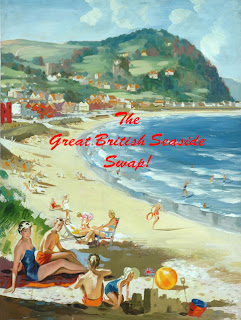 There are not many rules:~
1) You have to be a follower of my blog
2) Five items
3) The theme is the SEASIDE 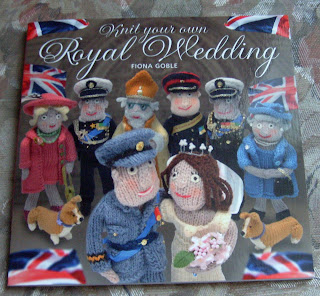 Swap for this book will take place on Monday 1st August, as I will have to contact you by email you will be able to tell me the best time to send it if you are on holiday.
Posted by KC'sCourt! at 10:37 11 comments: