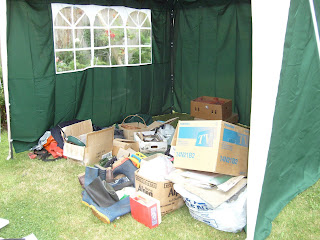 This is the last of the stuff to be sorted that was taken into the garden! 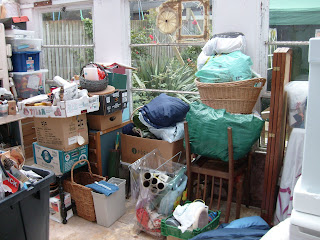 Most of it has gone back into the conservatory-cum-lean-to but it has gone back a a lot tidier, and it all needs sorting again but there is room to move and room to dry washing when I buy a new dryer to hang washing on, I do have a tumble dryer but you can't put everything in that! 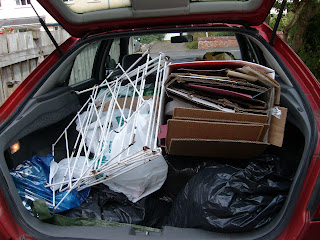 The back seat of the car was put down and the rubbish is ready to be taken to the recycling centre. I have to say most of it is mine!

Had to take the gazebo down because we are supposed to have heavy rain over the next few days, I wouldn't mind but I haven't actually sat in it yet! Mind you we couldn't have stood the gazebo in the conservatory-cum-lean-to last week there wouldn't have been any room!
I wouldn't have said it was a pleasure doing it.........but...........it was a pleasure to have taken a car load of rubbish to the recycling centre and we are determined to take more soon! Oh! and the stuff in the photographs in the last post is still THERE!!!!
Posted by KC'sCourt! at 16:40 5 comments:

Day 4 of Felicity's Challenge.
As I have said before we have been in our house twenty years! When you move as you leave the old house you throw a lot of things away - don't you? Well I did, but you wouldn't think so the amount of clutter that has been collected. inherited, or the boys haven't taken with them when they moved out over the last twenty years has quadrupled! It doesn't help with my hobbies, needlework, patchwork, knitting and crochet, and of course the fact that I work in a craft shop! Yes I am guilty too! But, Alex' hobby is much bigger, but it could be worse motorbikes/cars etc, and it is as bad, he collects and restores vintage valve radios! We bought the house because it had a well I won't say conservatory, but a well lit sunny lean-to, I thought oh goodie I can grow plants and sit in here when it isn't too hot.............WRONG! From day one it was filled with boxes, of junk, rubbish and if we didn't want it in the house and couldn't be bothered taking it to the shed or charity shop or the recycling centre there it sat until the sun either faded it or rotted it! Well I have now decided enough is enough it is my turn to have the conservatory-cum-lean-to! So.................. 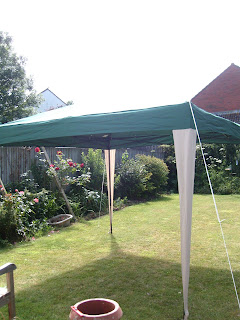 ...........yesterday after cutting the grass and after watching the local weather forecast, of which was said it would be nice for a while, and as it has rained for the last three summers, it was time to christen the new garden awning which was bought three summers ago and hasn't been out of its box since! 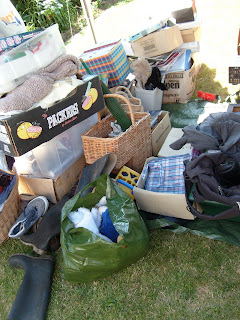 This afternoon, I half emptied the conservatory-cum-lean-to into it. Alex always claimed most of it was mine.........mmmmmmmmm! 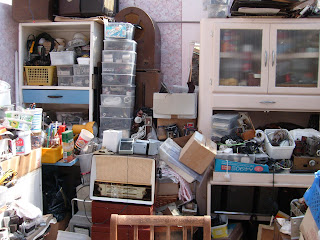 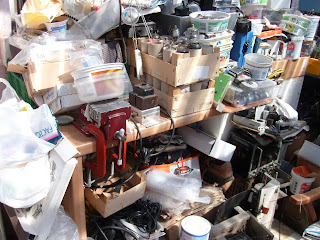 Whenever I was asked what cake I would like from the cake shop as a child, I always replied Custard Tart please......... They are quite easy to make too, although I have never attempted to make individual ones but I make large ones! 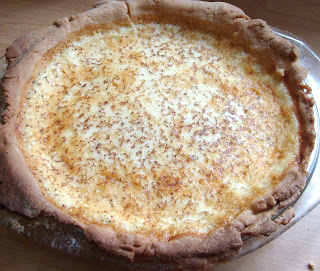 half packet bought Shortcrust/Sweet pastry pastry
(I use JusRol all the time!)
2 large eggs
freshly grated nutmeg
1/2 pint milk
2 oz sugar
Roll out the pastry and line the lid of a casserole dish or a flan tin.
Whisk the eggs with the sugar.
Warm the milk and pour it in a continuous stream on to the eggs, whisking all the time.
Pour into the pastry case and sprinkle the top with grated nutmeg.
Bake in the centre of the oven at
220 degreesC, 425 degreesF, Gas mark 7
for 10 minutes
then reduce the heat to
180 degrees C, 350 degrees F, Gas mark 4,
bake for a further 20 – 25 minutes until the custard is set.
Eat warm or cold. 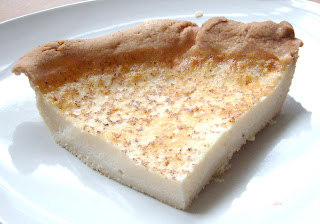 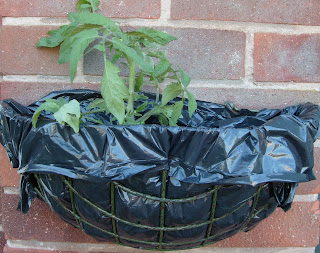 Planted one single Tomato plant in the hanging basket.
Just thought I would try one, they are suppose to be
grown in hanging baskets!
Posted by KC'sCourt! at 15:30 4 comments:

Yesterday was Alex and my Thirtieth Wedding anniversary. 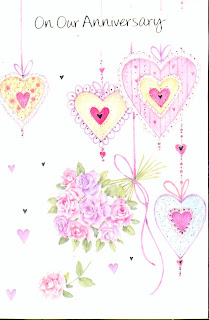 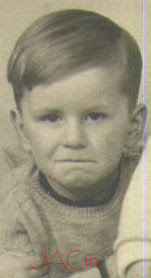 AND..........................back in January I joined Fi at Marmalade Rose with the '20 Minuters' I have crafted nearly every afternoon when I come in from work, not so much at weekends though, thats when we shop and I do the weeks ironing.........I plan on continuing to do so because I need crafts for a craft table in November, I do crochet and knit in the evening otherwise I end up going to sleep with boredom! Fi really inspired me and I hope to have many things for the two day fair. I also joined Simone at Linden Grove with her Friday Cake Bake. I make mine on a Sunday though when I have more time. I haven't made cakes for a few weeks now because I just cannot get motivated, but I will again! Monday I decided to join in with Felicity of Joshy & Belle with her 365 project. I thought this will just keep me motivated that little bit more too as there are a lot of other things I want and need to do. I really enjoy blogging, because I have met lots of lovely friends who inspire me and motivate me. 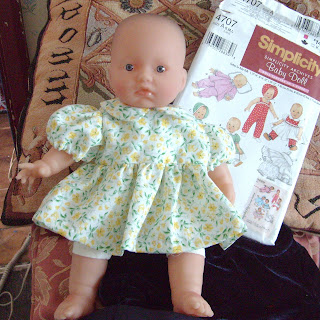 We have three pieces of vintage bedroom furniture to dispose of 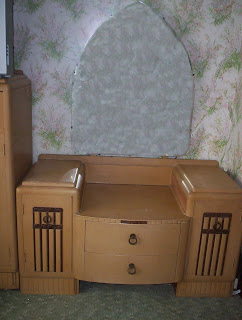 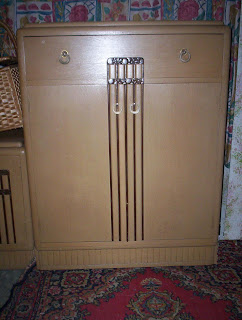 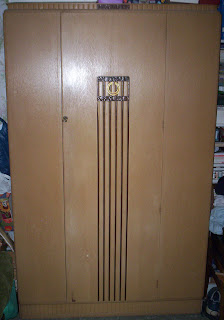 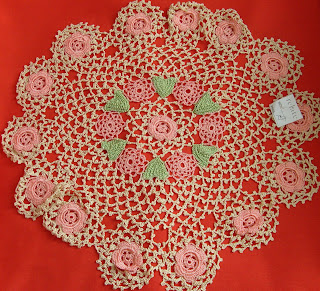 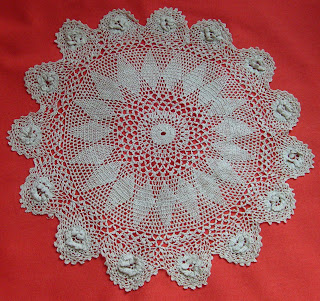 I thought these were quite pretty
The charity shop finds includes the
red cloth they are displayed on
it is a very large tablecloth! 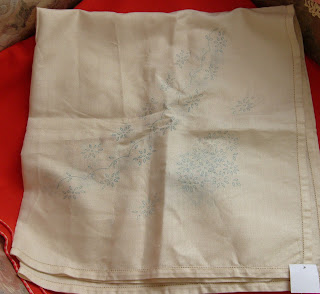 Another embroidery for me to do! 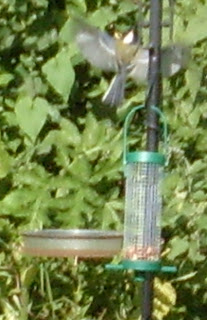 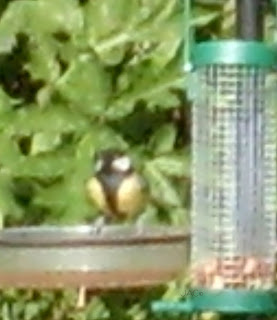 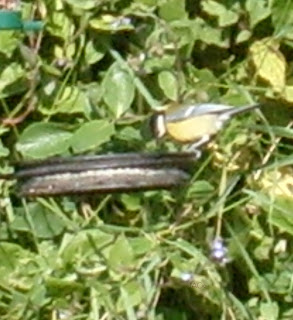 First time since the bird feeder was put in the garden
that we have seen Blue Tits, it does make a change from
Wood Pigeons, Magpies, Blackbirds........and Squirrels! 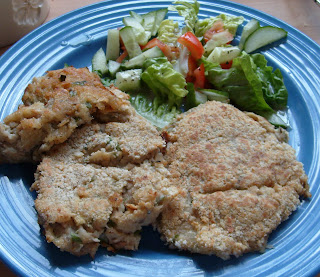 We had homemade Salmon Fish Cakes for lunch
not sure that they should look like that!
They tasted lovely I have to say 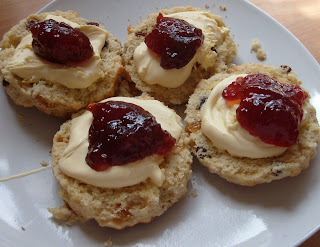 And made these for afternoon tea to go with
out special Earl Grey Tea
Check out the new items here.
I do have a PayPal account if you wish to purchase anything
just email me for a form
I am going to try and put a few more itemson this blog over the next few weeks
so please keep checking the blog
Posted by KC'sCourt! at 17:44 11 comments:

.........or in and out of the charity shops!
Today I got to go to Totnes!
We had a really wonderful morning. 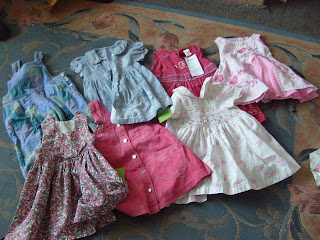 As you see mostly bought lots of pretty dresses for Caitlin 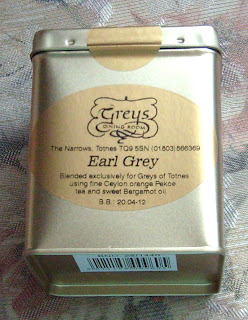 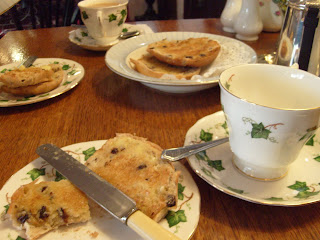 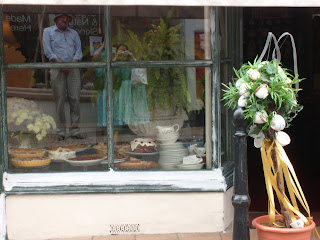 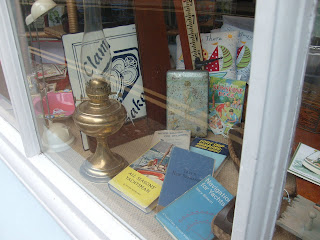 went into and met the lovely owner
of
This'n'That
and took my black shoes for repair at
Conkers
If you go here you will find a few more pictures of Totnes
Posted by KC'sCourt! at 18:53 12 comments: