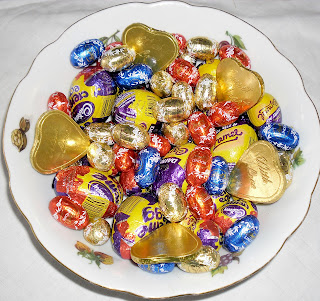 Hope you are all having a good Easter
Posted by KC'sCourt! at 14:04 11 comments: 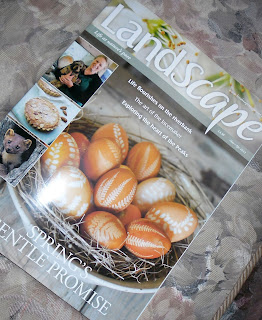 I discovered this magazine this other day.  I did say at new year no more magazines but........no excuses this magazine is really interesting.  I have not seen it before but wish I had this issue No.7
I found it much more interesting than Country Living or  Homes and Garden etc.  Not sure I will purchase it regularly  but I will certainly peak in it whenever I am in the newsagents (WHSmiths in my case and I had 20% off voucher for anything in the store - it included magazines) 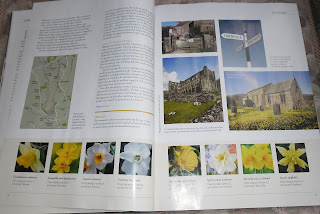 There was an article about Daffodils 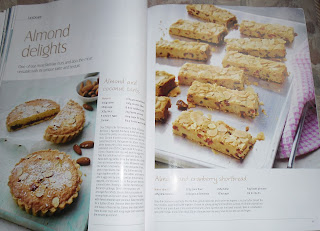 Yummy recipes these and Lamb recipes 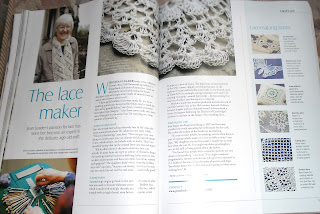 and an interesting article on Lace 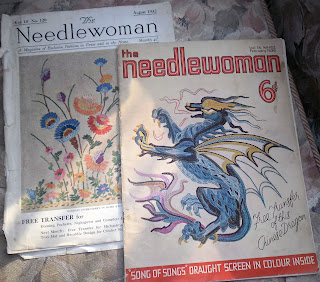 I purchased two more of my favourite magazines the other day.  A 1932 and a 1936 copy.  I settled down with a cuppa and had a little read of them. 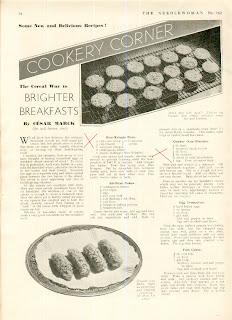 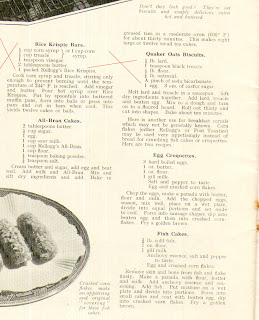 Click on this picture for the close-up of the recipes
Posted by KC'sCourt! at 08:49 4 comments: 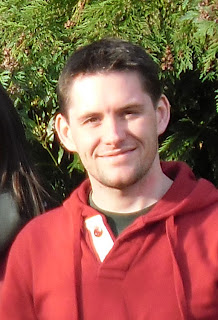 Our eldest son Michael is 32yrs old today.
Like me he has his birthday just before or just after or actually at Easter, depending when Easter falls!
Posted by KC'sCourt! at 08:12 7 comments:

We packed the car Friday afternoon for a forty-five minute journey to Trull, 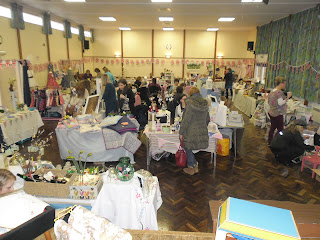 where Dee Dee was holding her fourth
DeeDee's Vintage and Handmade Fair.
There was lots of stalls and lots of interesting people. 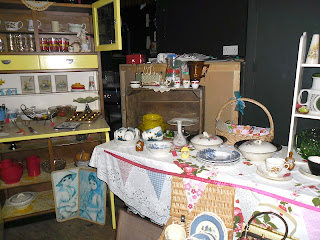 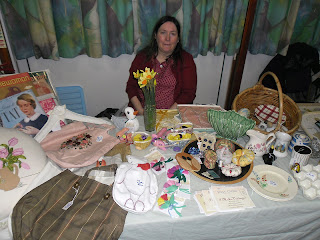 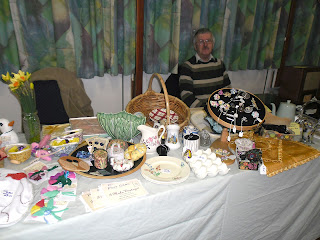 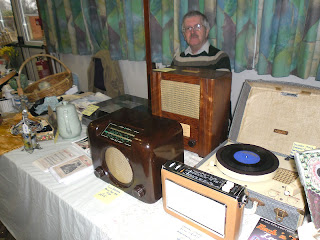 Alex with his radios.
He sold the DAC90 the shiny brown radio
and the Bush TRI30 the small brown transistor radio!
Posted by KC'sCourt! at 09:46 6 comments: 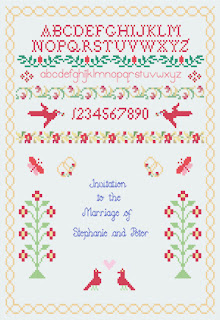 On the Saturday although it was chilly and a few drops of rain which held off most of the afternoon was our youngest son Peter's wedding to Steph. 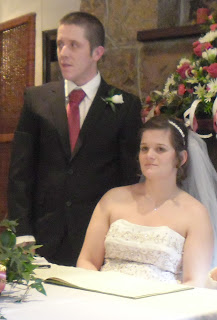 Lots of friends and relatives came to see them get married at Fingle Bridge Inn, Drewsteignton 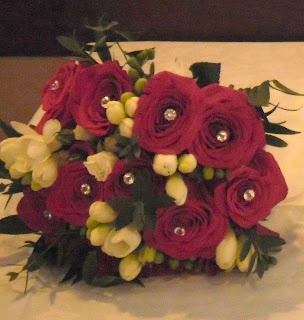 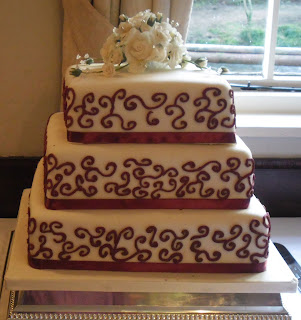 The place had a lovely atmosphere and everyone was so friendly.

On the Sunday, the weather changed tremendously, so Michael and Lizzie and  Robert and Anneka, and our close friends decided it would be best if they went home early.  Dad had organised lunch for us and Cynthia. We had a blizzard! 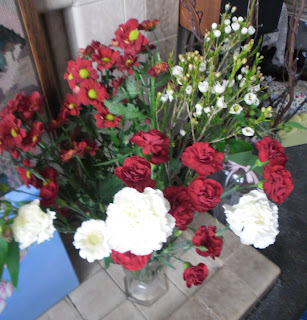 I had these flowers given to me as the mother of the groom. 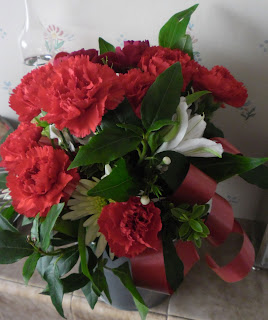 One of the table decorations 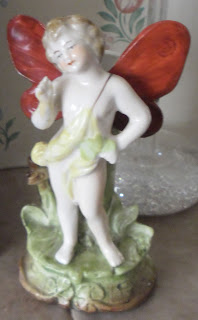 And this little beauty.  He is a specimen vase.  Isn't it gorgeous! 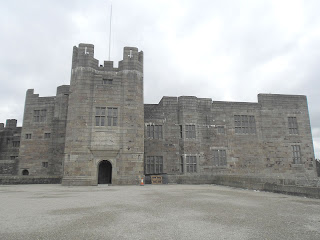 On Monday dad had a dental appointment so he didn't join us at Castle Drogo.  I had been wanting to go here for a long time, but when we arrived we were very disappointed.  it was just a shell of a castle all the exhibits had been put into storage.  The National Trust had decided to keep the castle open to the public but anybody going would be very disappointed.  The roof has been leaking for a long time and now serious repairs are needing to be done.  I can see why the National Trust kept the castle open for the revenue but I'm sure like us people will be disappointed! 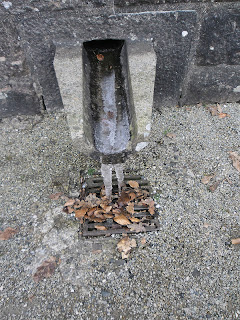 I wouldn't say it was cold after the blizzard the day before but there were icicles hanging from the walls.

Most of the rooms were opened and some that they opened that the public doesn't normally see. but there was nothing to see only the views.

But someone had a sense of humour! 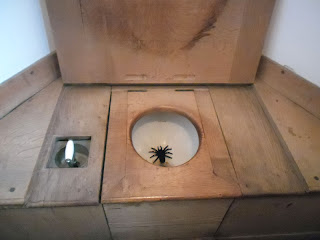 and there was some hilarity from this room!

Something you don't hear of or see these days!

This watch was presented to my grandfather by HRH Princess Margaret for long service.

In the early 1900's, 1910's there were four brothers and a sister.  Charles, Albert, George, Harold, and Emily.  Albert was my grandfather.  All the boys when they were 15yrs old were all sent to learn a trade.  Think Auntie Emmy learnt to be a dressmaker.
Grandad joined Harris Lebus to become a veneerer.  He joined in 1923 and stayed till the factory closed in 1969 when he had no choice but to retire.

There is a house in Chingford EC4 London (I won't give the name of the road) which my grandparents moved from in about 1968.  While they were living there he veneered every door both sides and the door frames and staircase.   It would be a shame if new owners had painted over but that's what people do!

I can spot a piece of Lebus furniture at 100 paces and when I saw a picture of a wardrobe on Hen's blog I knew exactly  who made it!  In the early sixties I had one in my bedroom which was very similar, except my clothes rail went across and the shelves faced outwards.

I actually still own some Lebus furniture.  The large wardrobes and sideboards in both granddad and nanny's house and mum and dad's  houses have long gone.  Except when mum and dad downsized mum asked me if I wanted any furniture and I asked for the chairs, because she once said you always need a chair.  A chair to sit on or to offer a person a seat. 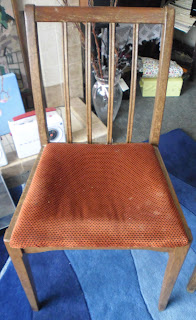 I have four of these chairs 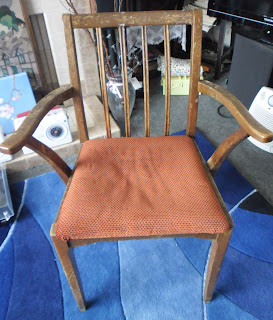 The seats have been recovered a few times over the years and I must get around to doing it again.  The wood has never been painted or re-varnished hence them looking scruffy but they are over fifty years old!  I don't want to paint them any way!  The original seating cloth I think is still there so as and when I get around to refurbishing them I will try and remember take a photograph.  These seats especially the carvers are actually very comfortable to sit in for long periods on time.

Nanny died a week after I had my youngest son in 1986, grandad two years later.

During the war grandad was in the Homeguard, also my father-in-law did a very dangerous job he cut the veneer woods for the Mosquito Airplanes! 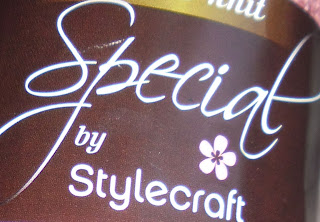 but since purchasing a couple of balls of this colour sometime ago for another project which never materialised, I have since found them and started making a jumper, but alas I do not have enough yarn to finish as the colour has now been discontinued. 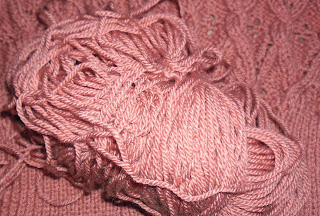 Please dear kind bloggers could you help?   I need about 50grms to finish otherwise I am going to have to undo two backs of my jumper which is knitted in cable stitch.

Please email me ~ thank you