What year was you born? 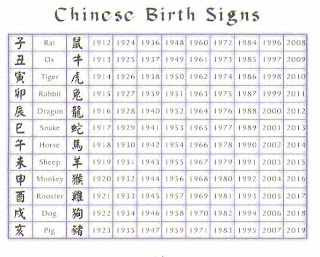 Chinese New Year begins according to the Chinese calendar which consists of both Gregorian and lunar-solar calendar systems. Because the track of the new moon changes from year to year, Chinese New Year can begin anytime between late January and mid-February.
Posted by KC'sCourt! at 13:07 3 comments: 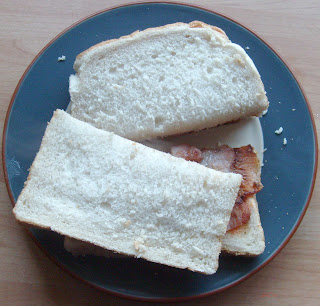 Bacon sandwiches in my mind should always be made with
uncut white bread!
My husband thinks we should eat always wholemeal bread preferably
with wholegrain in - I don't think so............!
We have this argument all the time - well I don't he does!
I happen to like both sorts of bread and I think I'm correct about bacon sandwiches! 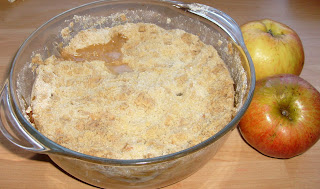 Today Robert and Anneka came to lunch I made Apple Crumble for pudding.
Ingredients:- 5 Large Cooking Apples peeled and sliced and tossed in 3 tablespoons of Sugar.
Crumble topping - 8ozs Flour, 4ozs Soft Butter, 4ozs Sugar.
Rub the butter into the flour until it resembles breadcrumbs then add the sugar, mix into the flour mix and pour onto the apples. Cook for about 50minutes 180 degrees until golden brown and the apples are cooked. 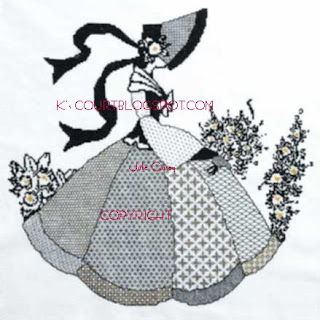 I have read many blogs, I find many people out there in Blogland love "vintage" and the "crinoline lady". Well in 2002 I redesigned the crinoline lady as a piece of blackwork she measures 24" x 24" (62cm x 62cm). I sell her as a Kit or a Chart only, if anybody is interested in her please leave me your email address and I will get back to you. 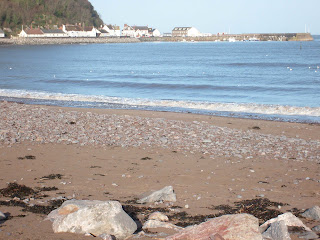 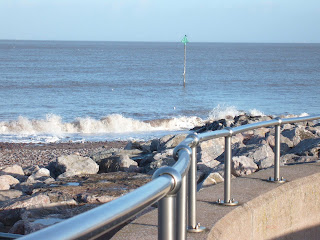 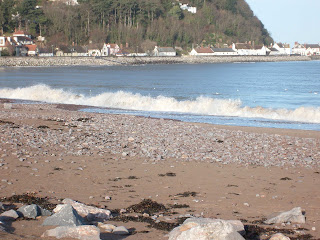 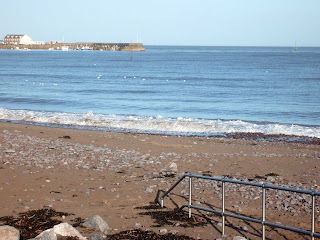 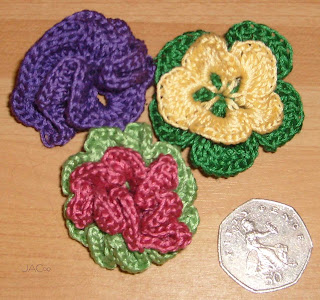 This afternoon, dull and grey outside.
I thought I would experiment with my crochet flowers
and made these with embroidery thread.

The Tete a Tete daffodils brighten the kitchen
Posted by KC'sCourt! at 18:19 2 comments:

Everything is back to normal!

The second weekend in January and everything is back to normal! The usual Tesco trip was done yesterday. No getting away from it we have to eat! We woke up this morning to this pinkish sky! 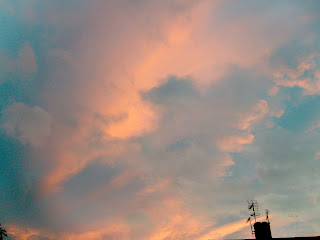 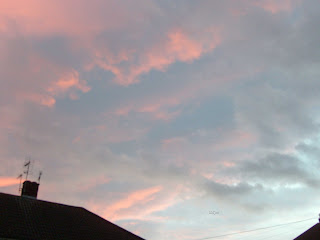 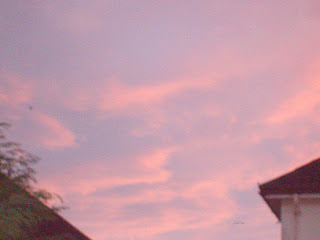 Today I was going to prune the shrubs but decided it was actually too early in the year to start doing that, I'll leave it for a couple of weeks and hope the rain doesn't stop me before the buds start shooting! I don't gently prune I destroy! I take the shrubs down to ground level and then hope they grow again...............they usually do!
This evening after late lunch, early dinner we watched this................. 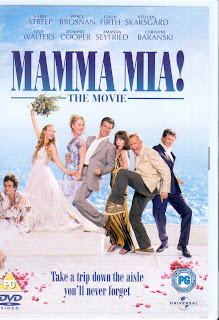 I wasn't sure if I was going to enjoy it after all the hipe! But I actually put my glasses on and enjoyed every possible moment of it. I would normally knit, crochet or even sew whilst watching a film so I didn't drop off to sleep but this film lived up to all the hipe, it was very very good, excellent in fact!
Posted by KC'sCourt! at 19:06 2 comments:

Back to work on Monday!

Friday 2nd January Alex and I went to my dads making deliveries on the way. I delivered thank you cards to Jane and Janice and cross-stitch to Denise, then Alex had to stop off at the museum to take a repaired 50’s record player back which was for sale.

The sun at 8.30 am on Friday 2nd January was bright orange and very low in the sky,
we were heading for the motorway! 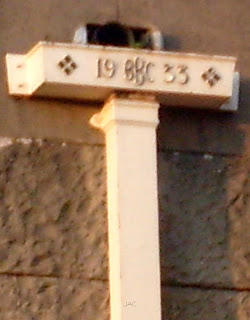 The museum is in part of a mini Zoo as well as being a BBC Radio Transmitting Station.
Even the drainpipes at the Radio Station has the BBC insignia 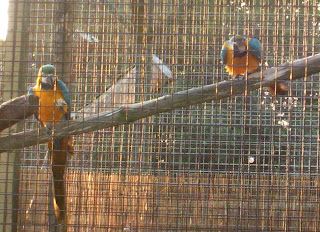 These two parrots saw me trying to take photos through the fences! 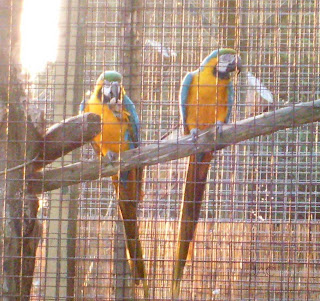 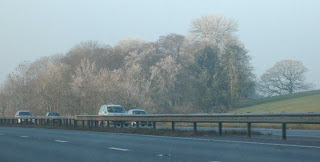 The trees on the motorway on the Somerset side were white with frost
over the border in Devon it was if the frost never got that far!

When we arrived at Dads about eleven the sun was shining and his washing was on the line dry! We had lunch and had a few more Christmas presents. 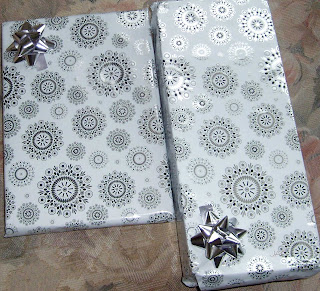 Michael and Lizzie came brought the last of the presents,
they should have come last weekend.
Back to work tomorrow!
This year there are a lots of things I want to do,
need to do, must do!

Hope everybody in blogland has a good Christmas. Ours was quiet. 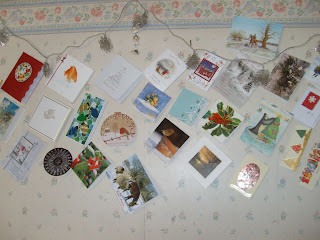 Christmas Eve I spent cooking I took the Tuesday off work because I needed to catch up with cleaning because I had the cold/flu thing before Christmas. So Christmas eve spent making sausage rolls and mince pies and.............marzipan and icing the cake! You know little things but they take all day! Peter collected Robert from Bristol and they both arrived about nine in the evening then promptly went out again! They both came without their partners who went off to see their respective parents. Christmas day was just Sunday lunch with a cracker! As heard on the television the morning before, and ours was. We opened presents in the afternoon and then watched the two Wallace and Gromit films. Boxing day Peter went about eleven as he had to be at work. Anneka arrived to pick Robert up about six, she went to see her parents in Derbyshire then drove all the way to here and then drove back to Bristol.
Michael and Lizzie were suppose to come on Saturday but cancelled because they had been partying the night before and asked if they could come Sunday. Michael rang Sunday to say he was just leaving and he would be on his own, knowing Michael I knew he would want to go as soon as he arrived so I suggested they both come the following Saturday 3rd January. In the meantime I had to cancel David and Jane because they were due to come Sunday. Monday was quiet, Tuesday was quiet but we did venture out for a breath of fresh air and did some shopping. Tuesday evening we went Neil's, and was entertained with listening to obscure 78 records and actually it was quite interesting. 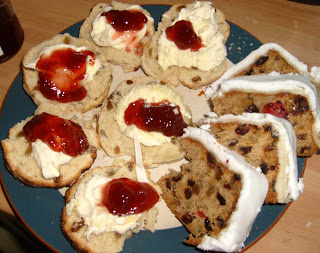 Wednesday afternoon David and Jane came just for tea and cake. Made some scones which we had with jam and cream, and Christmas cake. 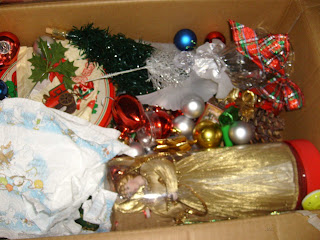