Sunday - hot sunshine, I wasn't feeling well, I felt dizzy and nauseous not all the time but if I exerted myself I had to sit down shortly afterwards. I put it down to the weather, it was rather heavy and stormy and I felt like it the next morning too, but as soon as it started raining I was fine! Anyway enough of me! I thank Alex he did most of the work! Seven years ago, and things move very slowly in our house :~P we had a new kitchen, it is pale yellow, we chose yellow because we have an east - west house built in the very late fifties, so the sun is in the front in the early morning and at the back most of the day. Due to the lack of funds things came to a halt........... 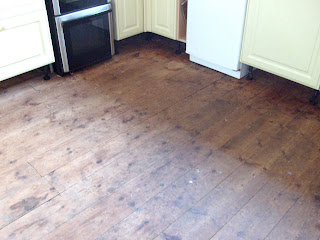 Bare floorboards! They even had a wide black line painted around the edge of the floor so that lino or a rug is placed centrally in the room! At this point I have to say we swapped rooms the kitchen was built in the large dining room and the old kitchen which only held the sink and a cooker, fridge and couple of cupboards. I got a bit fed up with the floorboards, they just got filthier and grimy. I have even been known to get down on my hands and knees and scrub the floor, but getting a bit old for that now LOL! Alex found the yard broom and scrubbed the floor ready for Monday. 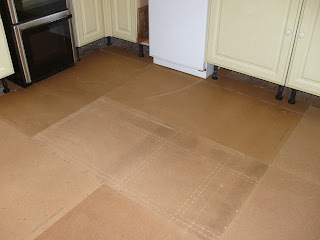 Two nice young men came and laid down some hardboard, didn't take them more that an hour and off they went saying see you tomorrow! 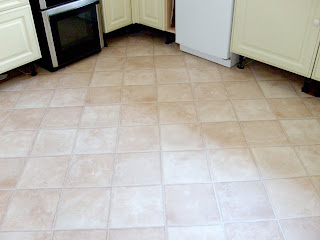 Today the two nice young men returned, I now have lino and metaphorically speaking I can eat my dinner off the floor :~)) You won't believe how happy I am! Now I just need Matthew to return to put the bases on the cupboards and it will be nearly finished! I say nearly finished! You remember I said it was an east-west, well the sun shines in the large window so I need a blind up the window, I have to time preparing the evening meals to coincide with the sun moving round at the moment, no excuse, the blind has been standing in the downstairs loo for about seven years!
Posted by KC'sCourt! at 17:20