Too Hot to Garden!

For the last two days we have been trying to sort the garden. Not an easy task, as we have picked the hottest days to do it and really we don‘t like working outside in the rain and cold. We have lived in this house for twenty years. When we first came here the garden had a Willow Tree and a hedge. The tree was actually the width of our garden and a concrete path which ran down the centre of the garden to just past the tree and stopped. It actually started in the centre of the conservatory where there isn’t a door and lead to no-where! At the bottom of the garden was a path which was the unused bier trail to cemetery. All the houses this side of the road have incorporated it into their gardens, so we gained another few feet too. The garden was very dark because of the tree. As much as we don’t like cutting things away for the sake of it, the tree had to go! The garden was now open, we could see it needed a lot doing to it. For another few years it began to look like a fallow field complete with the concrete path. Then about thirteen years ago we had new neighbours, a lovely family, they hadn’t been in long when T came to the front door early one morning and asked would we mind if they could take the hedge out, they would leave a little bit of hedge at the bottom if we wanted it? My reply - take it all away! Well I had never seen an expression like it, I think “glee” came to mind for her, it was the thought of no hedge on T’s and our part, have to admit I did a little skip after I shut the door too, they had the garden cleared and a new fence up in a day and we had gained another eighteen inches, yes the hedge was that wide and it was quite disgusting, weeds, dust, rotting apples and wind blown rubbish. T’s garden was full of very old apple trees when they moved in. Then another few years passed and then we had the grass laid which I hasten to add we tried to kill off twice! Once when the grass cuttings were not raked away properly an old lawn mower and no cuttings box, and again when we laid turfs down on top because we needed to put them somewhere else and the day turned into quite a few days and you can guess the rest! We then had a patchwork lawn because the lawn underneath went brown and slimy, it did grow back perfectly. We still have a lot to do the bottom of the garden which will have to wait till next spring to catch the weeds growing before they get to maturity. But at the moment we are de-weeding the flower bed and moving a few plants to out the front really to give the front some colour! 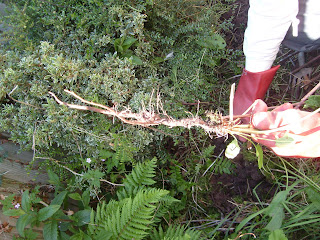 The root of one of the spectacular weeds! 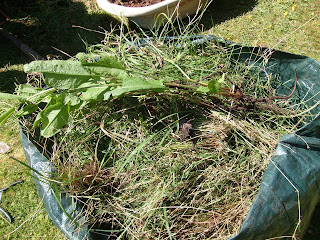 Two days worth of work!
The weed on top is the
rest of the plant from the above picture! 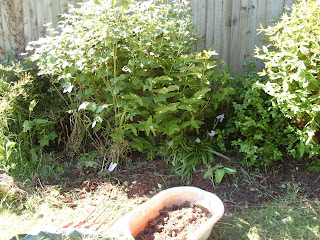 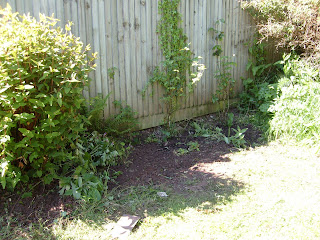 Now I change the subject! Early this morning I made these for Alex. It was because I threw a massive tantrum on Friday - still not over it……YET! But I made these all for him. I won’t eat them because they are Coffee and Walnut. It’s a bit like Marmite you either like Coffee or you don’t and I don’t like either Marmite or Coffee, Walnuts are OK! He was a bit suspicious when I presented him with a plate of cakes - he asked me what was in them, Arsenic I replied! He did try one but I still haven’t had a verdict on them, all he said they were very sweet! 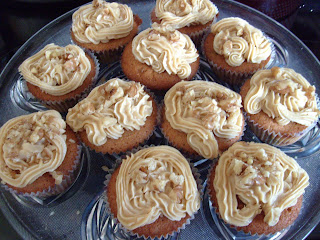 Coffee & Walnut Cakes
(please let me know if you make these)
Weight of one egg weigh in butter/margarine, sugar and flour
Beat butter and sugar together,
beat in the egg,
fold in flour carefully adding the coffee teaspoon at a time to taste.
Make-up two teaspoons of coffee in half cup of boiling water
Save any left over coffee for flavouring the butter/glace icing
Posted by KC'sCourt! at 16:28