In the days when it seems it was ok to really hurt peoples feelings by making them feel inadequate in the "womanly figure" department! Amazing really, were women really "pitied by women and ignored by men" if they were less than well endowed. Most intriguing though is what was the "something" that they would send you?  As they used to say "answers on a postcard......."
Posted by KC'sCourt! at 18:34 10 comments:

Better than any prescription!

After a visit to the doctors this afternoon, I had to collect a prescription from the chemist.  So while I was waiting for it to be prepared I went to the news agents nextdoor!﻿ 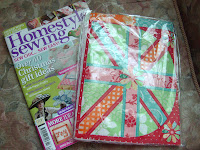 Saw this magazine!
It is new to me as I have never seen it before. 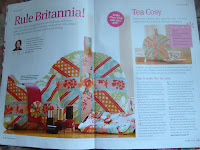 It came with a free Tea Cosy. I bit small for the average pot I think though, or you can make one of two other items from the fabric. 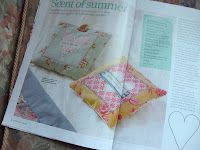 ﻿The Lavender cushions are quite pretty. 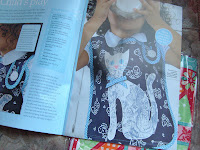 Think I may try and make this for Caitlin as an extra Christmas present!
Posted by KC'sCourt! at 16:48 8 comments:

About three weeks ago my friend Jackie and a her sister popped over for lunch.  We chatted and mooched around the charity shops.  She bought with her a carrier bag of apples.  I wasn't sure if they were cookers or eating apples, I forgot to ask so I treated them as cookers.  So far I have made..........  I now suspect they are eating apples! 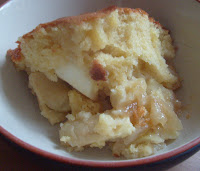 Apple Upside Down Cake
(I'm sure everybody has heard of Pineapple Upside Down Cake)
I used my usual sponge cake recipe but using two eggs.
Put the apples in the bottom of the dish and cover with sugar, then put the cake mix on the top.
About 40 minutes. 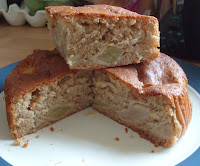 Apple Cake
Weigh three Eggs,
weigh the weight of eggs in Butter and Demerera Sugar,
weigh Self Raising Flour to the same weight as eggs and add another 3ozs
half teaspoon of Cinnamon
1 teaspoon of Mixed Spice
2lbs Apples - peeled and chopped (not too large and not too small)
80ml (eighty) Apple Juice
Cream butter and Sugar till pale.
Beat in the Eggs one at a time (if it looks like this don't worry!)
Sift the Flour, Cinnamon and Mixed Spice and carefully fold into mixture.
Fold in the chopped Apples and Apple Juice
Cook on 160 degrees for about an hour,
put in a skewer or knife and if it comes out clean it is cooked
(I don't have a large cake tin so I divided the mixture between two 8" loose bottom tins)
Eat warm with cream or custard or just have cold with a cuppa!
Which brings us nicely to these Tea Cosies which I have made!

﻿Beautiful weekend, well in the Southwest anyway! Anybody would think it was a height of summer, but alas no it is 2nd October, something to do with the Gulf Stream! And it is very disconcerting that is is really hot and it gets dark by 7.30 and getting dark earlier every minute. Bit too hot for me I'm afraid, I don't do heat very well. We both had a wonderful weekend though. First of all we went to Taunton yesterday morning just to look at the shops I bought Liam some clothes (a fur lined jacket would you believe?) for part of his Christmas presents; I also tried to purchase cotton sheeting for the quilts I am making but the shop said they were ordering Monday. Then we had lunch, did a bit more looking round the shops.  When the time for the carpark was up we drove to here and had a fun afternoon Great place for nostalgia in childhood TV. I can actually say I remember every Dr. Who since 1963 with William Hartnell (never thought then I would actually have a son who would appear in an episode of Dr Who) and although I personally was not allowed to watch much TV especially on days weatherwise like today, and I was only allowed to watch things approved by mum, and remember TV was not 24hrs then either I could name nearly every character!........Oh! I feel really old! 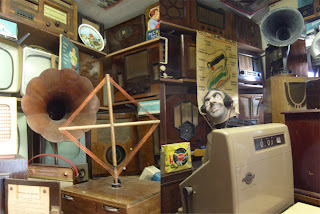 There was a different varieties of radios and televisions in every corner and space possible 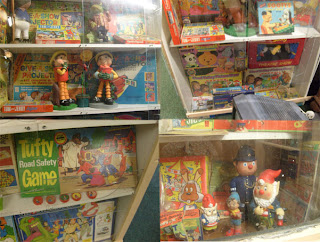 as well as many toys and games with a TV theme 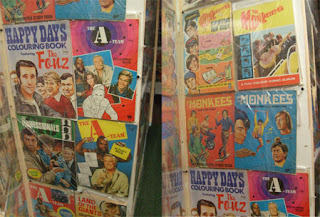 as well as books and annuals 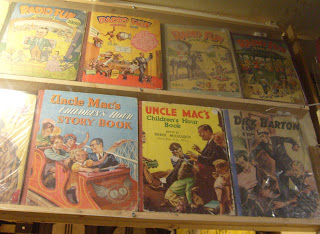 as well as radio annuals

I remember this character very well.  He is called Twizzle.  Twizzle had concertina legs who always helped his friends.  Is there anyone else would like to remember Twizzle.......? 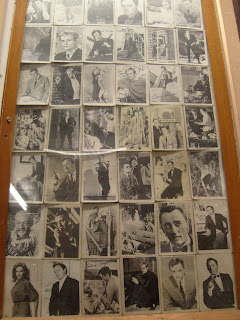 photo collection of the Man from Uncle 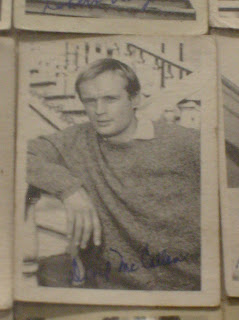 ﻿I have a blank wall in my kitchen, I asked for a large picture of David McCallum
Wasn't allowed one!
after afternoon tea and cake at the museum
we went to see Hen and her lovely family and wonderful cottage 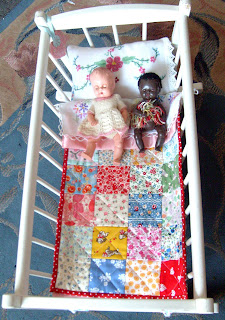 I purchased this for Caitlin, but grany thinks she may keep it to be played with only at her house.  The dollies are mine from when I was Caitlins age.  I managed to find the knitting pattern to re-make the white clothes!
Yes that is a grass skirt you see on the black doll, but it has been there since she was created probably the early fifties! 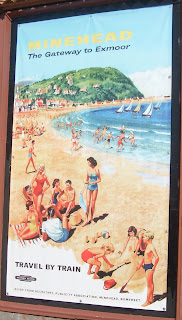 after lunch we went to the station to see what was there as it was a Steam Weekend.

...........it was Norton Manor having a photo-shoot on the turntable!  Something us locals don't often see because they only seem to use it for special weekends! 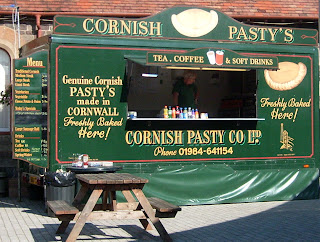